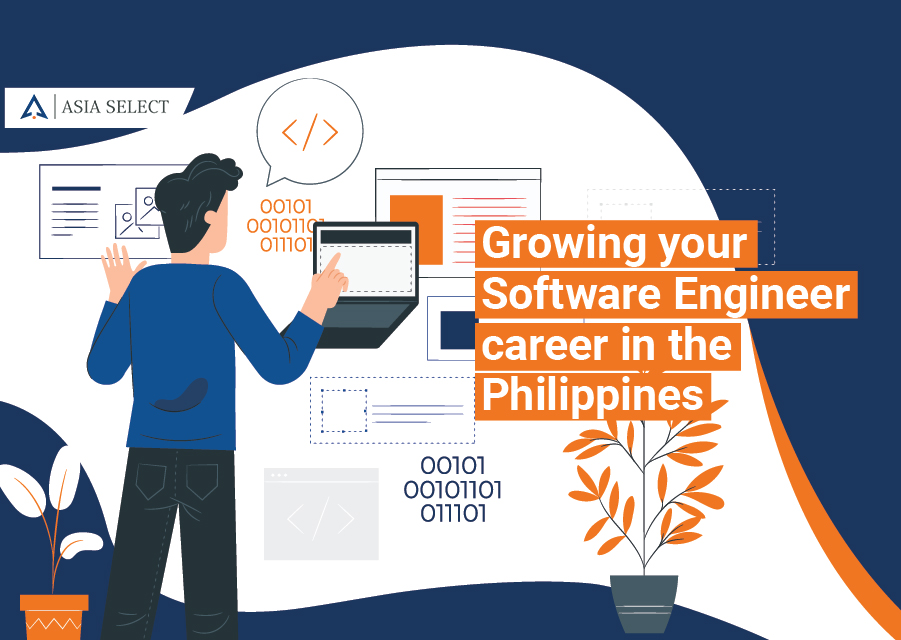 Growing your Software Engineer career in the Philippines

With the rapid growth of digital transformation in various companies across industries, starting your career as a Software Engineer bounds you to many job opportunities and even career progression.

As you head over to JobStreet, Monster, LinkedIn, and even on the Asia Select Career Hub, you would notice there are thousands of available jobs all over the Philippines for professionals who are well-rounded in designing, coding, testing, and debugging of various software systems. The number of job vacancies alone is a good indicator that the age of Software Engineering is at its peak because of the growing demands from companies across industries.

Despite knowing the possible job opportunities as a Software Engineer, the next question would be: would you fit the qualifications and requirements employers are looking for?

Whether you are a junior or senior Software Engineer, we recruitment headhunters are here to guide you on how you can prepare yourself as you start or grow in your career.

Here’s a list of insights we can share with you as you plan #YourNextChapter as a Software Engineer:

What does a Software Engineer do?

Based on various job descriptions and our client requirements, Software Engineers in the Philippines are expected to:

What are the usual tools, languages, and methodologies used by Software Engineers?

Majority of the Software Engineers use .Net, JavaScript, CSS, and HTML as their main tools or languages; while for methodologies, they often use Agile (i.e., Scrum) and Waterfall.

What is the difference between a Software Engineer and a Software Developer?

Software Engineer design, develop, test, evaluate, and maintain the computer software. They are more on the systematic side who oversee the overall process.

Software Developers work on the development of software. They are more on the creative side by focusing on the codes that will run the software.

There may also be case to case basis where a hybrid of responsibilities of a Software Engineer and Software Developers combine, depending on the structure of an organization.

What are the in-demand jobs for Software Engineers in the Philippines?

The most sought-after jobs for Software Engineers in the Philippines are Full-Stack Developer, Front-End Developer, and Back-End Developer for both local and multinational companies.

Full-Stack Developers work with both the front and back ends of a website or application by handling projects that involve databases, building user-facing websites, or even working with clients during the planning phase of projects.

What are the companies or industries in the Philippines currently hiring Software Engineers?

Given the digital transformation initiatives of companies all over the world, Philippine-based companies are also keeping up with the global tech trend. Organizations belonging to the IT-BPM (such as Shared Services, BPO), FinTech, E-Commerce, Manufacturing, and Power & Utilities are looking for junior and senior Full Stack Developers, Front-End Developers, and Back-End Developers.

How much does a Software Engineer earn?

Based on actual market data gathered by Asia Select recruitment headhunters in 2021, the salary range of an entry-level Software Engineer in Philippines is between ₱20,000 – ₱50,000 depending on the company or industry.

Experienced Software Engineers with a handful of knowledge in different technical tools and who handled multiple projects have the advantage of getting higher pay.

How is the career growth for Software Engineers in the Philippines?

The career growth or progression of Software Engineers in the Philippines is positive. In fact, a junior software engineer can be promoted to a managerial role in a span of 7 years—given he or she is qualified based on finished projects and mastery of technical tools. Know more about the role’s career progression through the following infographic: 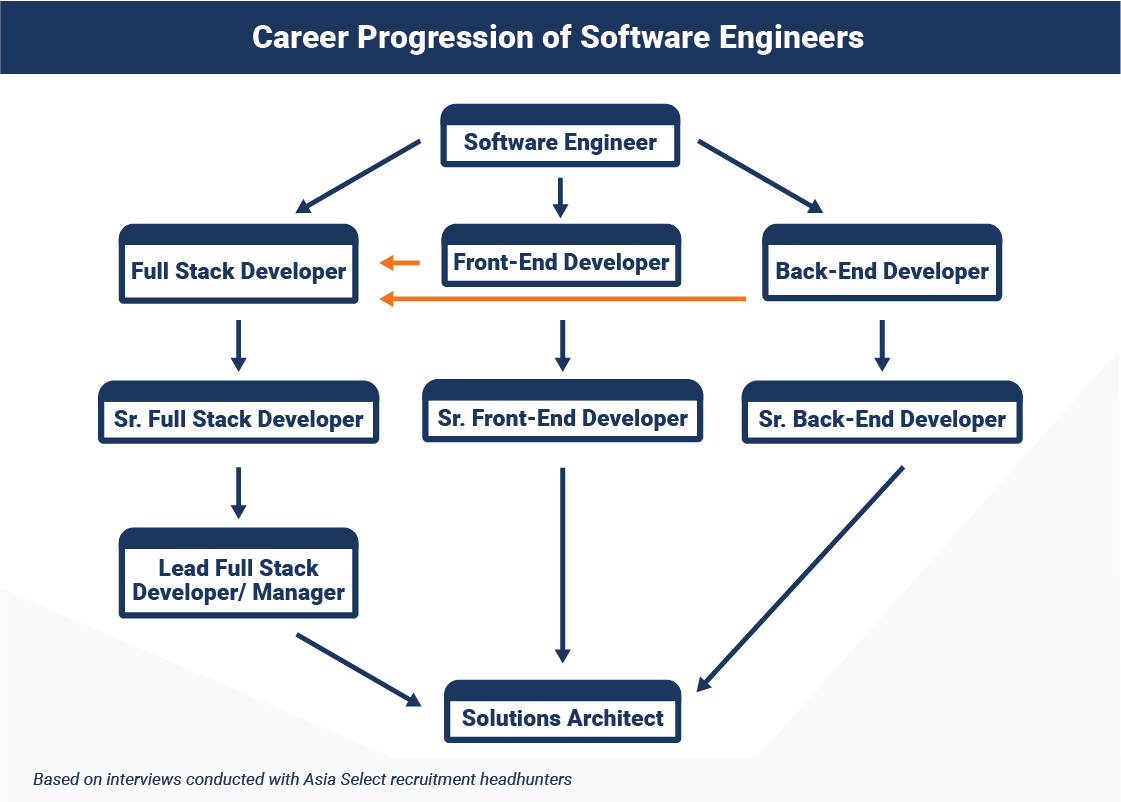 Front-End and Back-End Developers can also change their career track to be a Full Stack Developer given they have the technical knowledge and skills needed in the end-to-end development stage of a software.

How can a Software Engineer get promoted or have a career growth?

Building expertise and skills and accomplishing different projects are important for Software Engineers.

Reaching out to recruitment headhunters is also a way to explore job opportunities for career growth. As headhunters, we are always on the lookout for top talents who we can help land a better job opportunity. 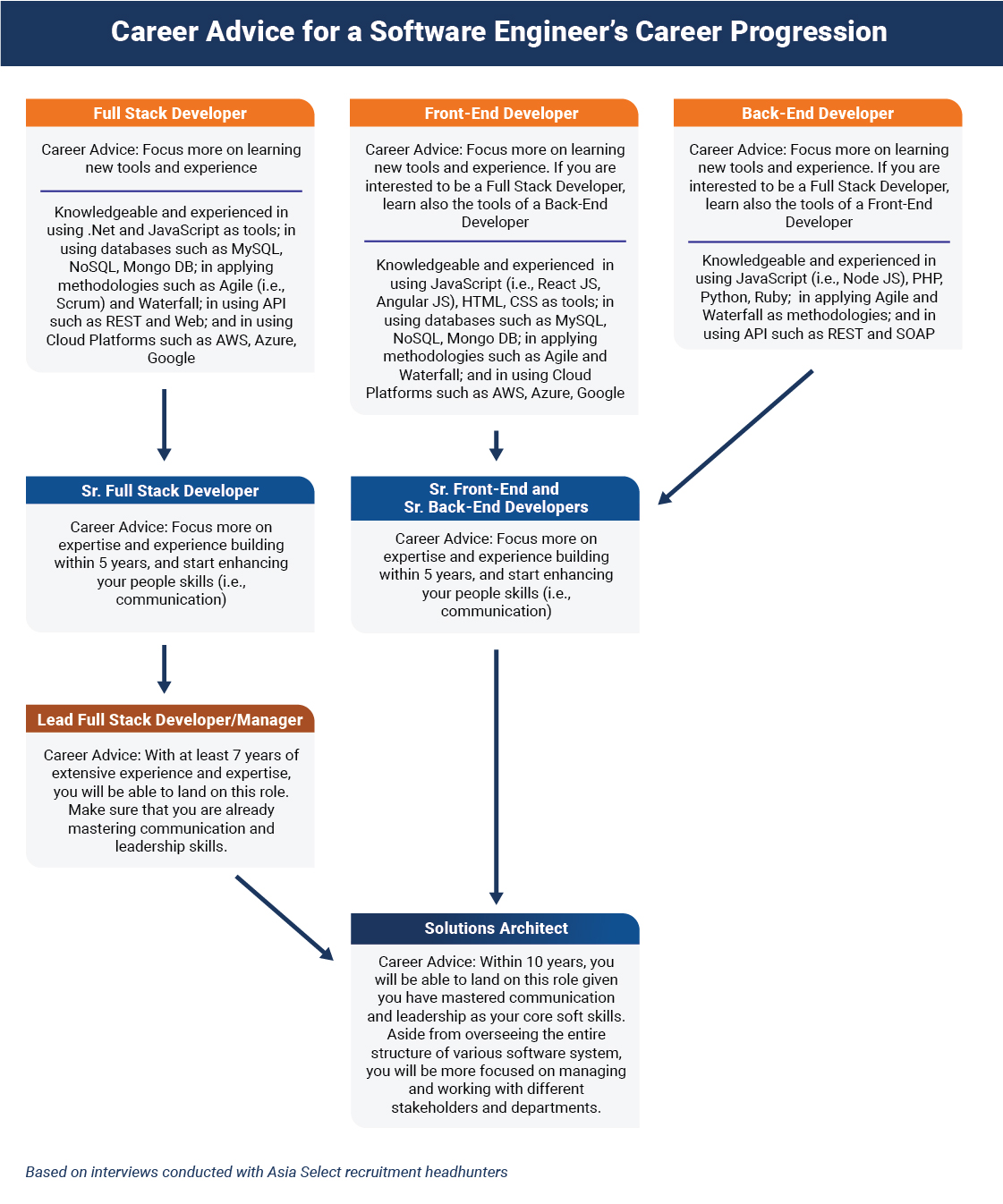 What are the non-technical skills (or the soft skills) that Software Engineers need to have?

The scope of work and involvement in the business increases as you grow in your role, such as managing and collaborating with other teams, stakeholders, and clients.

If you are aspiring to grow in your role—whether as a senior member of the team, a Lead Full Stack Developer/Manager, or as a Solutions Architect—it is critical that you hone the following soft skills:

Having the ability to solve problems efficiently, deep-dive more into the industry, and be more involved in the company’s business are also important as you progress in your role as a Software Engineer.

You can also read:

Any cookies that may not be particularly necessary for the website to function and is used specifically to collect user personal data via analytics, ads, other embedded contents are termed as non-necessary cookies. It is mandatory to procure user consent prior to running these cookies on your website.

The industries
we support

The industries
we support

Share this ArticleLike this article? Email it to a friend!
Email sent!